A Promotion for my father 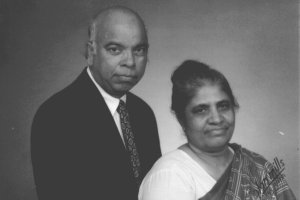 Two years and three months after my mother passed away, my father has joined her. Pappa passed away on 17 June 2009 at 7am. He was moved out of the ICU on the 16th since there was nothing else the doctors could do for him. He had gotten to the point where there was no more response when he is called. After he was moved to the room, we tried to make him as comfortable as possible. Since the neurologist had told me that he may still have his hearing, I called Charlie and asked him to bring some CD’s with old songs that he likes, and the audio Bible in Malayalam. We played that in the room throughout the day, in hopes that he would be able to hear. He had said many times that since his eyesight is poor now, he cannot read the Bible anymore. That was a great loss for him…not to be able to read the Bible. I had always tried to get him to listen to the audio Bible, but he always said, “yes, but its not the same as reading it for yourself.”

During the night, I was in the hospital room with Pappa. Since his breathing was heavy, I followed his breathing throughout the night. I woke up many times and would listen carefully for the sound of his breathing. Finally, in the morning at 7am, he breathed his last, to be with his Lord that he loved so much.

In 1998, when my wife spoke with my mother about the death of both of her parents, Mummy recited this verse: “Lord, you have been our dwelling place throughout all generations” Psalm 90:1. It is good to know that our parents served and trusted God and passed on that faith to us. That gives us hope to transfer the same faith on to the next generation.

Thanks to all who prayed for us during this difficult time. I know that it was the prayers of so many that helped us to gain strength in God. Thanks for the many emails, sms, and blog comments that were left (including chat that I did not reply). Thank you.

15 responses to “A Promotion for my father”